Which Fishfinder should I choose?

Lost in the minefield of Fishfinders? Choosing a fishfinder or a chartplotter/fishfinder combination unit can be a daunting task. So many models to choose from, each with associated acronyms and complicated technical terms. This brief guide will hopefully help to decipher the text and guide you to the right product.

When buying a fishfinder there are three basic considerations:

• What type of sonar do I need - traditional, down scanning or side scanning?

• What size screen should I choose?

• Where should I mount the transducer?

Operating speed: Typically 0-30 knots
Depth range: This depends on the frequency used - the lower the frequency, the deeper the water penetration. The maximum depth for traditional sonar, on the fishfinders we sell, ranges from 500-1100ft
Mounting: Available in transom mount, thru hull or in hull. Mounting in hull is acceptable as long as hull thickness is less than 20mm and the hull is not double skinned 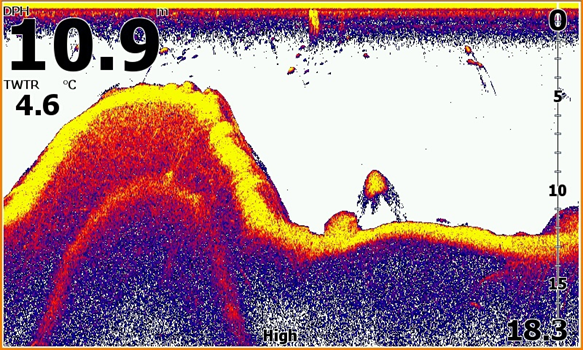 Down Scanning Sonar
High frequency sonar (between 455-800kHz) which gives great imagary of wreck and general bottom structure. The high frequncy picks up much more detail than traditional sonar.

Operating speed: Typically 0-8 knots
Depth range: Not as deep as traditional sonar. The maximum depth for down scanning sonar on the fishfinders we sell, ranges from 250-300ft
Mounting: The transducer needs to be in the water so transom mount or thru hull is needed. Not suitable for in hull mounting as high frequencies will not pass through the hull material. It is however, possible to use the transducer inside the hull of a kayak, as the hull is thin enough to enable the sonar to pass through.
Brand names used for down scanning sonar: Garmin - DownVisionTM; Raymarine - DownVisionTM; Lowrance - DownScanTM; Humminbird - Mega Down Imaging TM 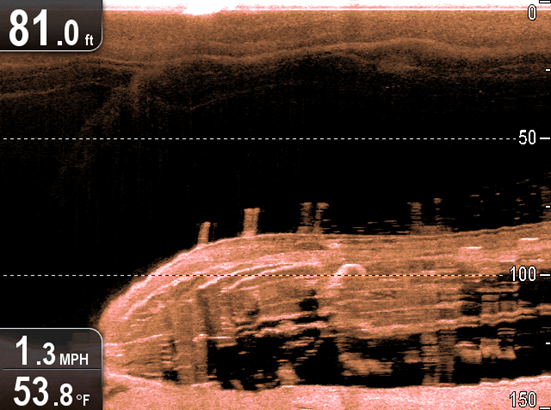 High Frequency sonar (between 455-800kHz) which gives great imagary of wreck and general bottom structure either side of the boat. This type of sonar offers a huge scan of the seabed and is really good for finding wrecks, lobster pots and marks that can be missed using downscan.

Operating speed: Typically 0-8 knots
Depth & side range: Not as deep as traditional sonar. Maximum depth and side range on the fishfinders we sell, ranges from 250-300ft
Mounting: The transducer needs to be in the water so transom mount or thru hull is needed.  Hull mounting is not suitable as high frequencies will not pass through the hull material. When mounting on a transom next to a sterndrive or outboard leg, you may see shadowing caused by the leg interfering with the side beam.
Brand names used for down scanning sonar: Garmin - SideVüTM; Raymarine - SideVisionTM; Lowrance & Simrad - SideScanTM; Humminbird - Mega Side Imaging TM 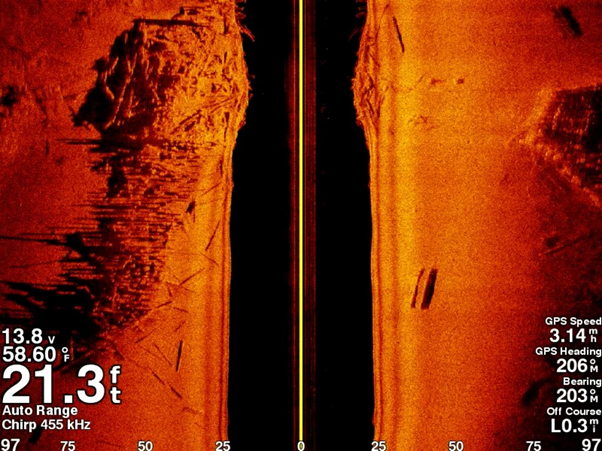 Many fishfinders now have internal GPS and a non-mapping waypoint screen which is useful for marking favourite spots.

Image: Measured from corner to corner as per TV sets.
Sizes: These start at 4” and go up to 9”. Bigger screens are available when you choose a Fishfinder/Chartplotter combination unit.
General recommendation: Pick a screen that you can see easily from your normal helming position. For example a 4” screen is fine for a kayak or small boat where the screen is fairly close to the user.  Choose the biggest screen that you can physically fit and that your budget allows, considering power requirements as bigger screens draw more power.

To get the best results from your fishfinder, the transducer has to be mounted correctly. Most fishfinders are supplied with a transom mount transducer which, when installed correctly, will give great underwater imagery.

Follow the steps below to mount the transducer in the area of least turbulence and where it will sit in the water at all speeds.

1. Mount the transducer on the starboard side of the outboard/outdrive. The best results are achieved when the flow from the prop comes over the top of the transducer

2. Mount the transducer as far away from the outboard/outdrive leg as possible, but in a position that is always in the water even when the boat lifts up at planing speed. If mounted too close to the leg, the turbulence around the leg will cause noise on the fishfinder screen 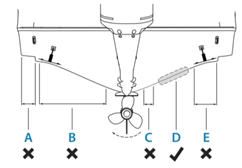 3. Mount away from any trim tabs and hull strakes for smooth flow of water under the transducer 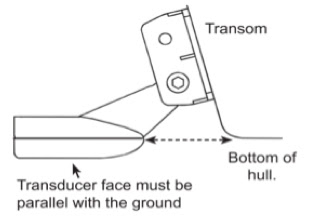 4. Mount the transducer so the centre line is in line with the bottom of the boat. Most transducer mounts have slotted screw holes to allow for vertical transducer adjustment. With the transducer in position, drilll the screw holes in the middle of the slots to achieve the correct positioning.

What does this mean? - instead using a single frequency for the sonar ping , a fishfinder with CHIRP will use multiple frequencies

Why do I want this? – In very basic terms, using multiple frequencies gives better clarity, target separation and less clutter

Mega+ - Humminbird's term for very high Frequency down and side scanning sonar – around 1.2MHz

Hypervision - Raymarine's term for very high Frequency down and side scanning sonar – around 1.2MHz 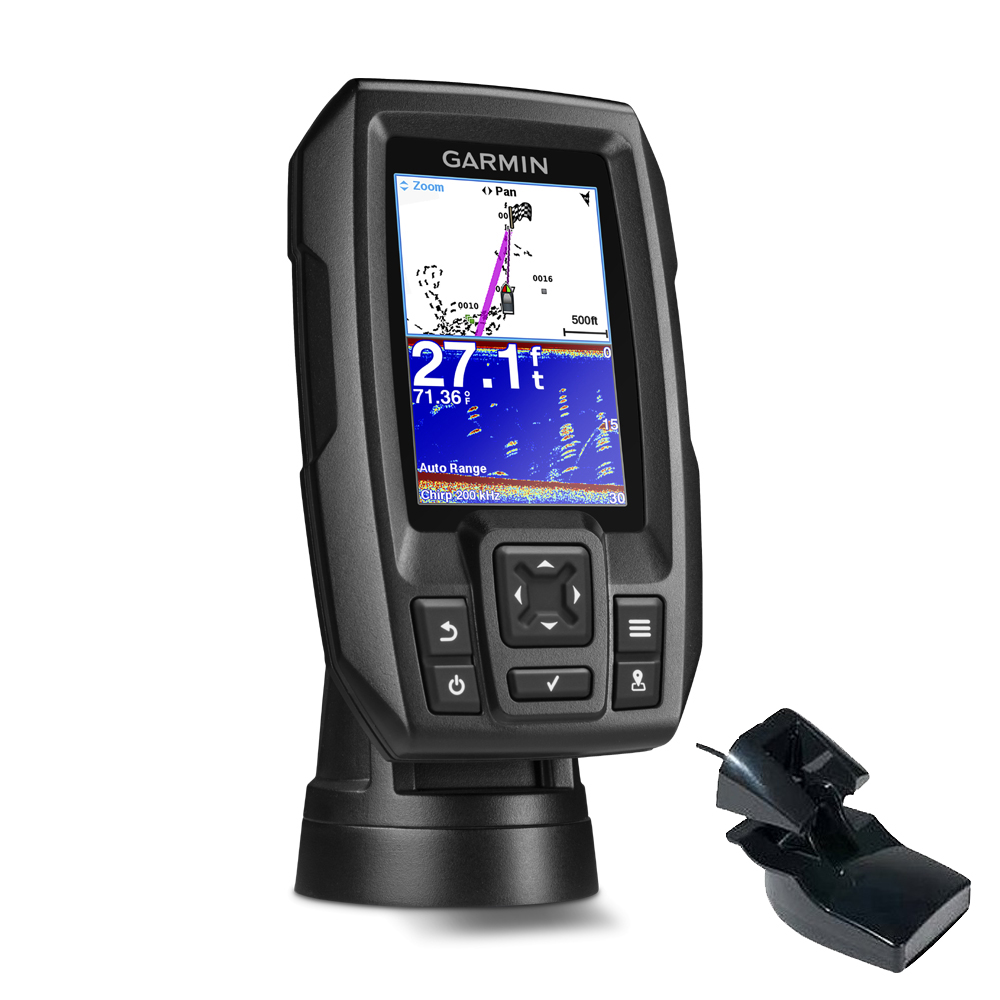 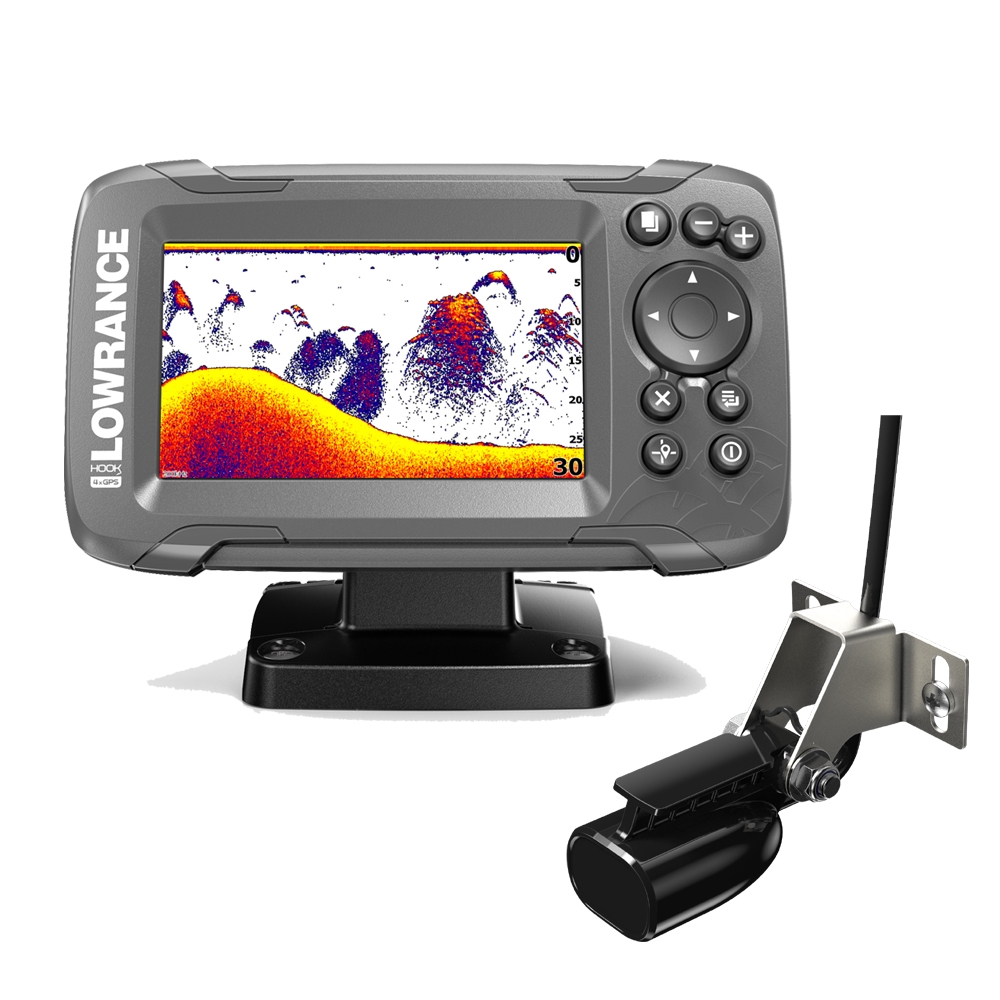 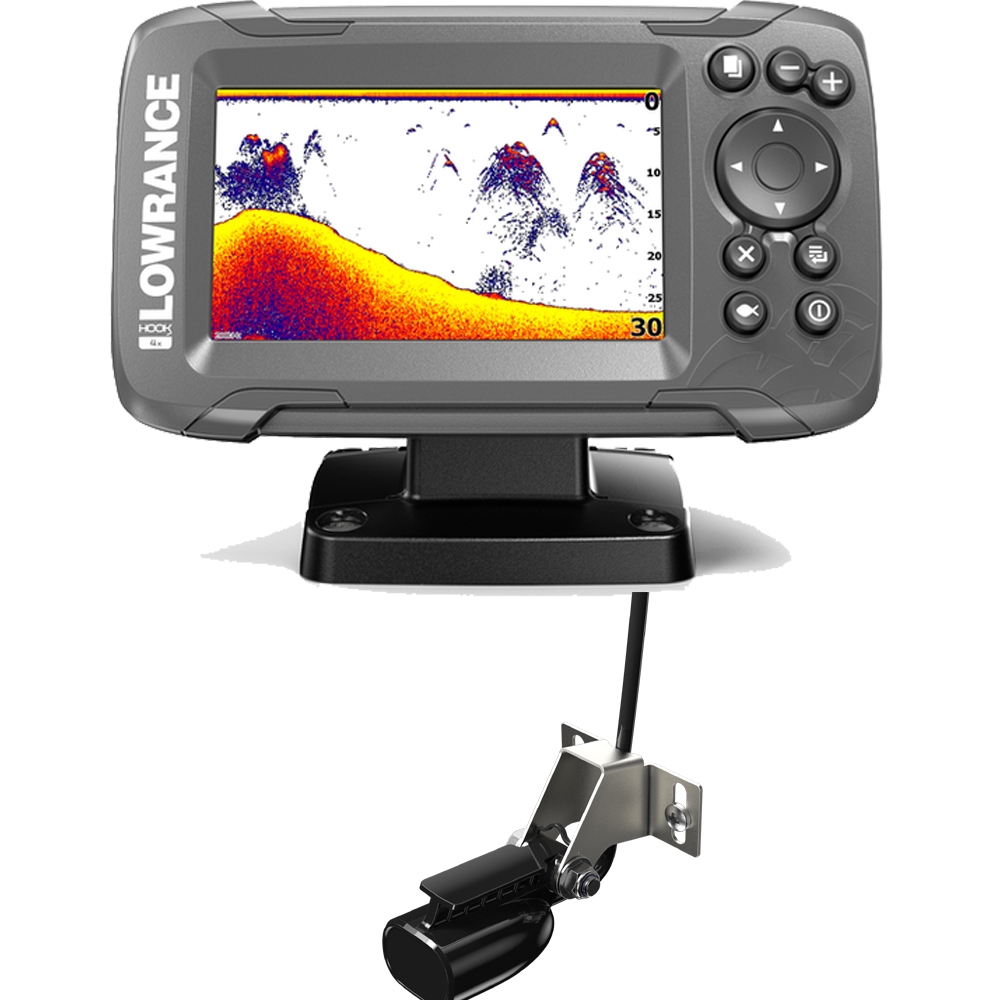 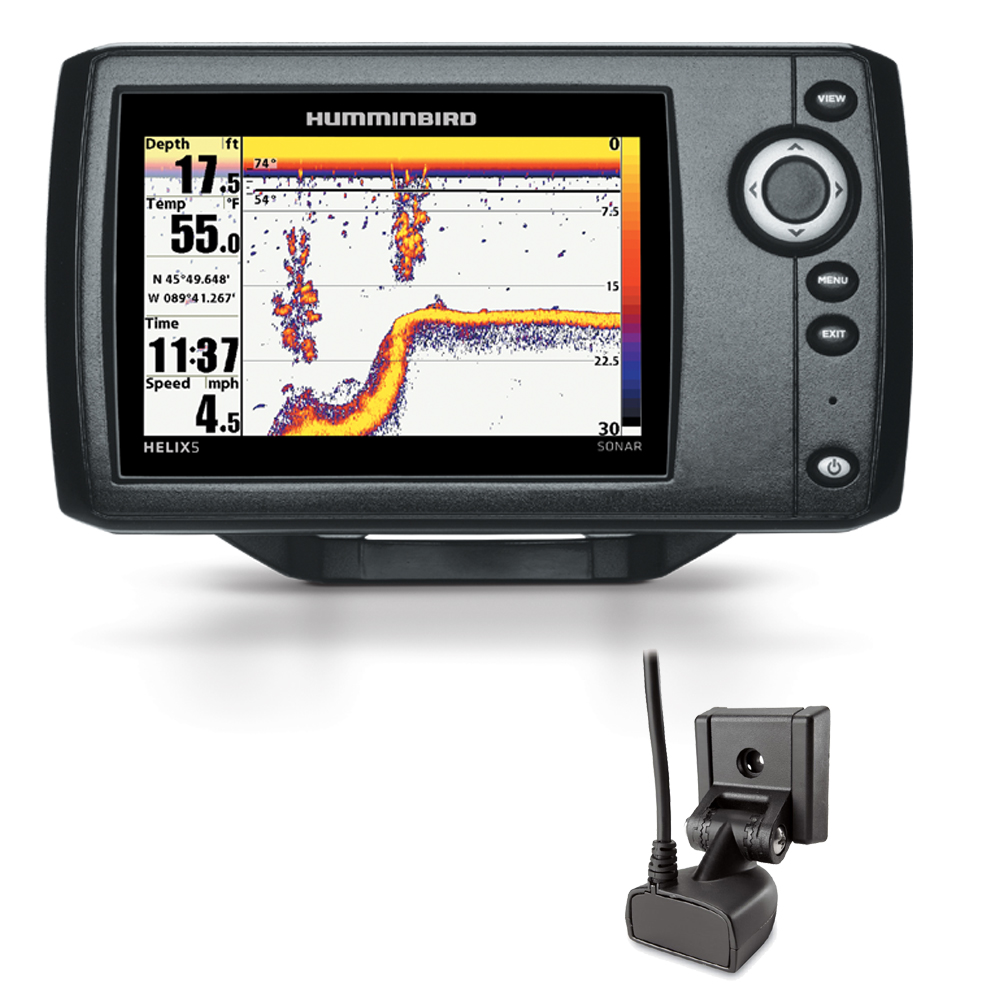 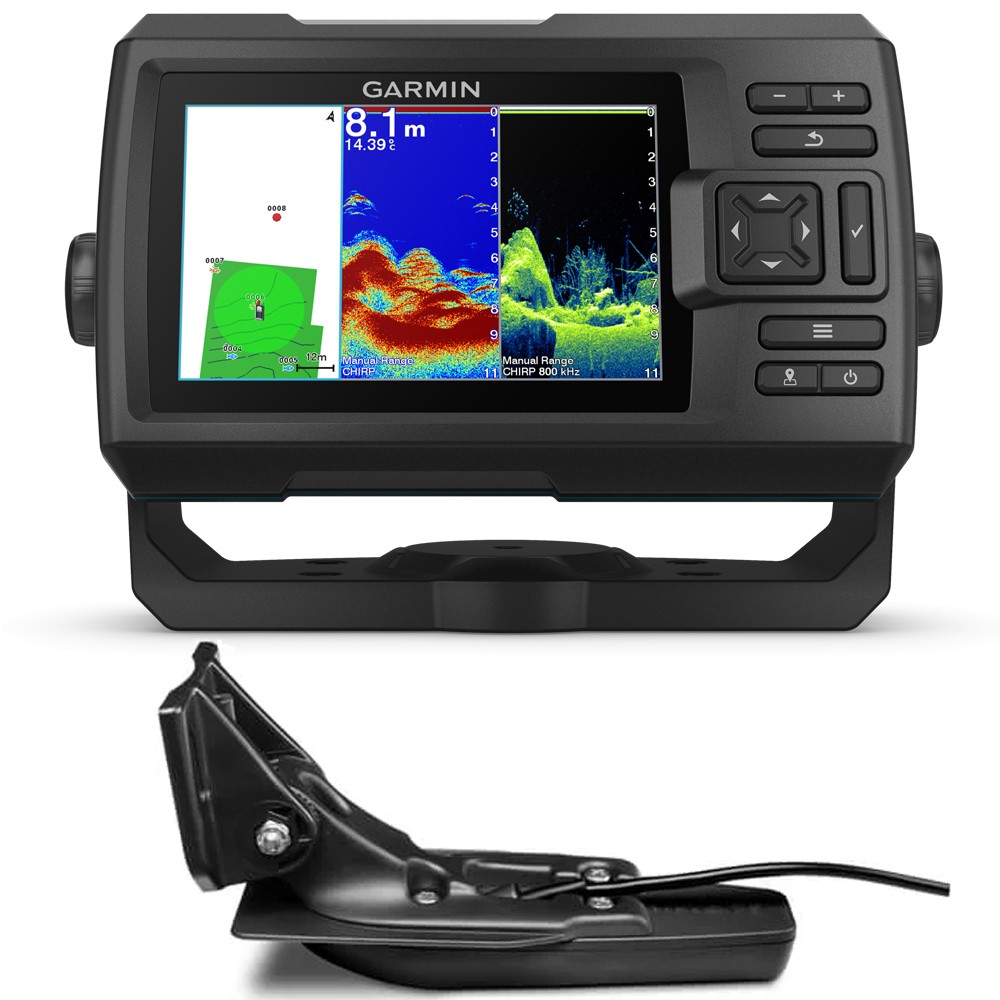 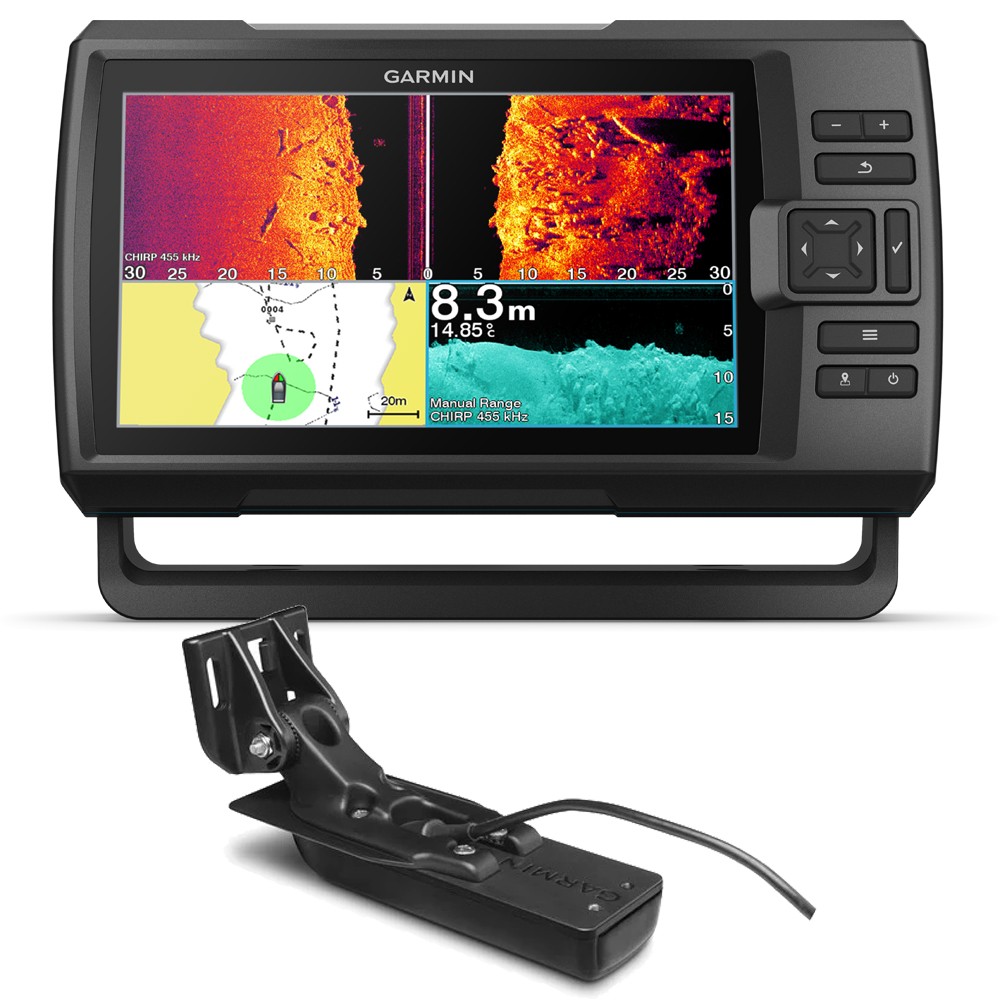